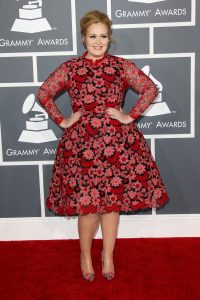 Adele Laurie Blue Adkins is a singer and songwriter who is popularly known amongst her fans as Adele. She is 27 years old and was born in Tottenham, London, England to an English mother and a welsh father. From an early age she was encouraged by her parents and other people around her to explore her music talent which was evident. Adele’s rise to fame came in 2006 after a friend posted her demo on Myspace. From the popularity of the demo she got a contract with XL Recordings and on the following year she went ahead to win a number of music awards.

Adele released her debut album in 2008 and its title was ’19’. This album went ahead to become a double platinum in the USA and seven times platinum in the UK. She also received the best pop vocal performance and the best new artist awards in the 2009 Grammy awards. Her second album was titled ’21’ and was released in early 2011. This album even surpassed the success of the first album where the singer/songwriter won different awards including six Grammy awards in the year 2012. In the USA this album held the top position longer than any other album since 1985 and it sold more than thirty one million copies worldwide.

Her third album was titled ’25’ and it was released in late 2015. This album debuted at number one in most of the major music markets all over the world and this further contributed to Adele’s rise to fame. It also broke the first week sales records in both the USA and the UK. The lead single in this album was titled ‘Hello’ and it became the first song to sell more than one million digital copies after a week of its release in the USA. With her music success she was named as one of the most influential people in the world by the Time magazine. She is also one of the best selling recording artists in the world.

She started dating Simon Konecki in 2011 and in 2012 they had a son. She was quoted saying that becoming a parent was one of the best things to ever happen in her life. She said that parenthood gave her a purpose to live. As a celebrity she always creates time to be with her son and she has even sued a certain photo agency which compromised the privacy of her son through leaking photos of her and her son during a family outing. She gained some weight and there were concern over this because most people believe that female celebrities need to remain skinny. But she said she does not have a problem with her weight provided she remains healthy and her partner is not complaining.

Adele’s music style has played an important part in her success. She writes lyrics with a certain message which many people can relate to. She also sings in a way that it is easy to sing a long and as a result many people understand her songs easily. She also has a likeable character where she seems humble but confident. This has made her a role model amongst many girls all over the world who sees her as an ordinary girl unlike most celebrities who are flashy and exotic. Therefore, Adele’s rise to fame has been steady and her popularity is expected to increase even further in the future.

Thank you to this gutter repair service for sponsoring this post!

This entry was posted in Blogging. Bookmark the permalink.